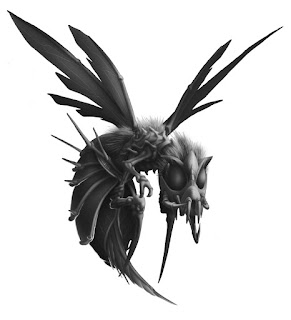 This one's going to be a real pain-in-the-you-know-what for the PCs.  Let's hope they never find a way to make it to the green moon they see in the night sky.  However, they seem to always find a way into certain death...

BLACK HORNET OF THE GREEN MOON

On the green moon of Negalu, even insects take on a life-threatening and sinister aspect.  The black hornets of the Green Moon make their nests in the tree-tops of the Negalan jungles, spending the majority of their time foraging for food and growing their nests.  Since it never winters on the moon due to its proximity to the sun, black hornets are always active.  They are notoriously hostile, often attacking for no larger reason than their victim crossed into their flight path.  They are nearly three feet long, and incredibly fast when flying.  Even the warlike Negalu-Men fear them, for their sting often means agonizing death.

Black hornets will always attack with their bite first.  On a successful attack they deal 1d3 points of damage and automatically attach to their victim, dealing instant sting damage.  The victim of the bite is considered grappled, with all relevant modifiers applied, and removing the hornet is resolved with a grappling contest.  As long as the hornet is attached, it may deal automatic sting damage each round.  Black hornets may use their poison in combat every 1d4 rounds, a roll of 1 indicating the very next round.  Victims of the sting will take 1d6 points of damage and must make a successful saving throw or suffer the effects of a particularly virulent poison.  It has an onset time of 1d4 minutes, after which the victim will sustain 1d6 points of damage for 1d4 rounds.  A sting from an attached hornet will always do 1d6 points of damage, whether it can use its poison in that round or not.

Quick Note:  My monsters will make use of my house rules.  Most often referred to will be Conditions, which I converted to S&W from Pathfinder, and put out Condition Cards for you in the blogosphere to have a look at (see link in the right bar).  Also, very few spells will match their standard counterparts in S&W as far as names go - for instance, curse of chaos and disorder is confusion.  I just like how it sounds better.  Plus, it makes use of conditions - so substitute in your own stuff if you feel like it.  All the artwork above is "found art" on the internet, so if it winds up being owned by you and you don't like it being here, just say so and I'll take it down.  These are pictures that inspired me, and they're used out of respect.  No infringement intended.
Posted by HAA at 8:50 PM 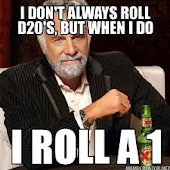